TO TRAVEL TO NEW YORK CITY  for a writer’s conference is awesome.

That it was a conference of more than two thousand romance writers and industry professionals made it a further shade of awesome.

That I attended the Romance Writers of America national convention in July 2015 as a multi-published author with Harlequin, the biggest publisher of romance in the world, shot the awesomeness right off the top of the scale. 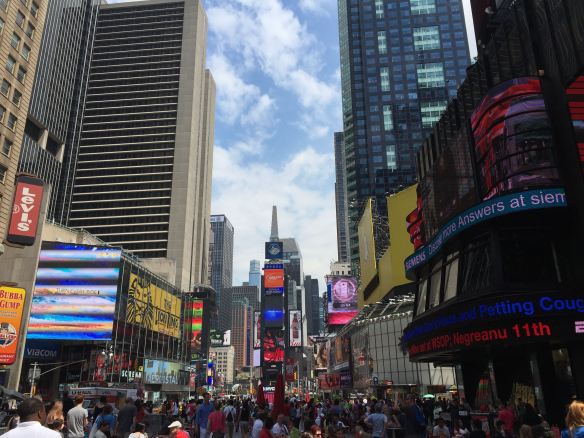 Times Square was packed with visitors – even at midnight

The conference was held at the Marriott Marquise hotel—right on Times Square. RWA delegates prefer to stay in the same hotel as the conference is held.

New York in the summer – what a great place to be!

I was fortunate enough to find a wonderful roommate, blogger Kim Lowe from the popular book blog, SOS Aloha. We barely knew each other but ended the conference firm friends. I also caught I up with writer friends from all over the world.

With my fellow Harlequin Romance authors: (from left) Christy McKellen, me, Jessica Gilmore and Scarlet Wilson. They’d come from the UK.

The convention comprises a myriad talks and workshops aimed at the beginner romance writer to best-selling authors wanting to keep on top of their professional game. The conference is also a good opportunity for authors to meet with their editors and literary agents—many of whom are in New York. 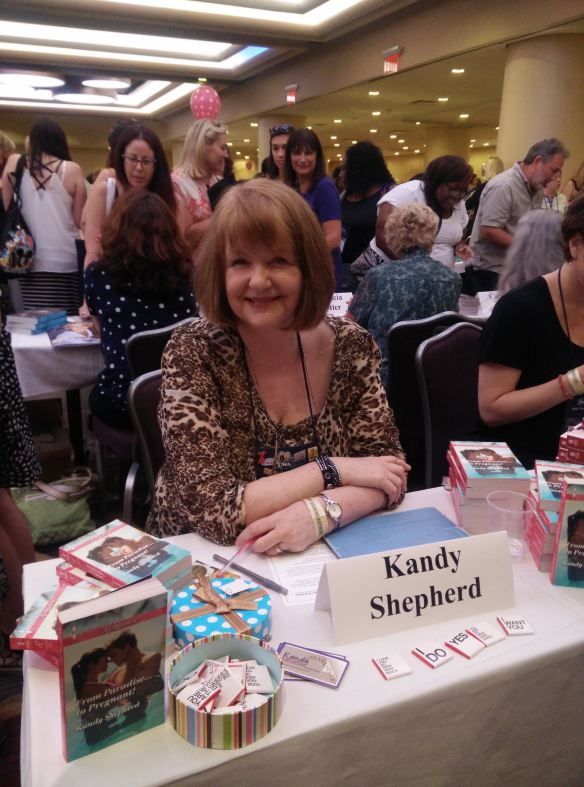 Signing my June release, FROM PARADISE TO…PREGNANT! at the literacy signing.

Unpublished writers get a chance to pitch their stories in one-to-one sessions with editors and agents—which can be nerve-wracking but ultimately rewarding. You see people practising their “pitches” all over the hotel.

All the authors signing free books at the Harlequin signing

One of the highlights of the conference is the massive book-signing that is open for free to the romance reading public. Publishers donate books for sale and the proceeds are donated to charities promoting literacy in the host state. This year the signing raised more than $US48,000 for literacy. A fabulous result—after all, it’s in our interest as authors to have a literate population!

Hundreds of authors, ranging from best-selling mega-stars to newbies with their first book, are assigned space on tables set up in rows in a vast room and sat in alphabetical order. Keen romance fans by the thousand start lining up early in the day for a chance to meet their favorite authors and buy a signed book. The noise level is extraordinary!

Welcome to the ball at the Waldorf Astoria
Photo © Harlequin Books

Other book-signings are held throughout the conference by the major publishers—the difference being that the books at these signings are free. The signings are open only for fee-paying delegates to the conference and are very well attended. We’re all readers before we’re writers. And free books. Needless to say a stash of new books made its way home with me.

A standout of the conference is the parties the big publishers host for their authors, usually on the Friday night. The granddaddy of the parties is the one put on by Harlequin. And what a party! Writers joke they want to get published by Harlequin just to get invited. 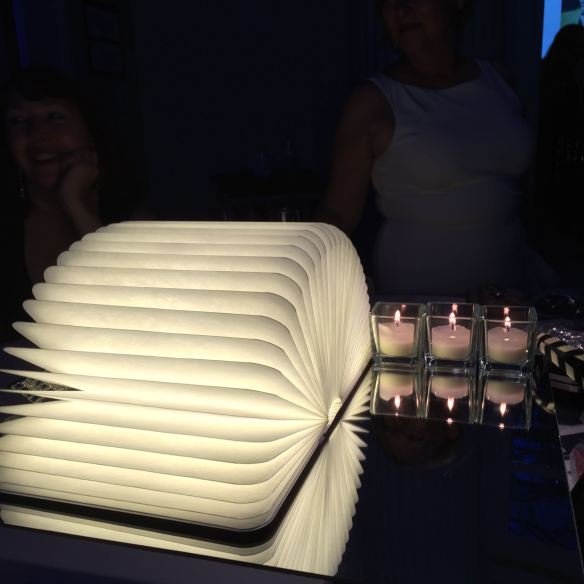 Fabulous book shaped lamps at the Harlequin party – I would love one!

Friday night can be a tad dismal for unpublished authors at the conference unless you take matters into your own hands. At one RWA conference years ago a group of us who knew each other online and were meeting face-to-face held our own “pity party”. We enjoyed ourselves immensely—and in later years were able to catch up with each other at our various publishers’ parties. Because we all got published—in part because of what we’d learned from attending these conferences.

Much coveted were this year’s invitations to Harlequin’s Black and White Ball held at The Starlight Roof at the famous Waldorf Astoria hotel on Park Avenue.

Many of us writers spend most of our time wearing yoga pants and sitting at our computers. This was glamour indeed—one author told me going to the party was not only the highlight of the conference, but also one of the highlights of her life. Guests took the theme to heart by wearing gorgeous outfits in black and white.

It really was fun!

They say a writer’s conference comprises a group of introverts desperately pretending to be extroverts. They did a very good job of it at the Harlequin party.

Formalities were kept to a minimum and then the dance floor was thrown open. Harlequin imports the same DJ from San Francisco every year and he knows exactly the music a bunch of writers and publishing staff of a range of ages wants. Everyone danced, danced, danced without inhibition. I got a blister on my toe, which needn’t have happened as Harlequin provides a pair of thick socks to each guest so they can slip off their shoes to dance.

Famous authors and high-ranking editors and publishers joined in dancing alongside first-timers. (Yes, Nora Roberts was dancing right next to me!) One author told me the dancing reminded her of long-ago sorority parties. Most of the authors are women and there was a wonderful spirit of camaraderie. In such glamorous surroundings, with an open bar and endless chocolate desserts on offer, it really was the perfect party.

I started off the conference feeling a bit grumpy, overly jet-lagged and wondering if I should have come. Was it worth it for a trip of just six days? My flight from Sydney, Australia was delayed by six hours and missed the connection in Los Angeles to New York. Instead of arriving at 5pm, I arrived at 1am the next morning. Then I lost my iPhone (thankfully someone handed it in.) To top it off, I realised I had packed two left shoes of two pairs of completely different black sandals!

I packed a complete useless “pair” of shoes. What a waste of luggage space!

Those early qualms soon dissolved in the sheer awesomeness of attending a conference of this size and professionalism. I even managed to see a little of New York on the Sunday after the conference ended (I’ve been there before and done the sights). And to my utter joy, discovered the shops were open until 9pm that Sunday because of the sales. The New York sales where everything was massively reduced. (Some new shoes with both a right and a left were purchased!)

Next year’s conference is in San Diego, California, a place I’ve long wanted to visit. Will I go? I’m keeping my fingers crossed that the kind of bargain airfare that got me to New York comes up later in the year.

Because back in my yoga pants, writing, writing, writing to finish a novel to meet a deadline, I’m fired with inspiration and the satisfaction that I’m doing absolutely what I want to do. The conference works to make me feel connected to the bigger publishing world beyond my desk and screen.

Kandy’s latest release from Harlequin Romance is Hired by the Brooding Billionaire released on August 1, 2015.

“Beauty and the reclusive billionaire…

When billionaire Declan Grant decides his estate’s enormous garden needs taming, he hires idealistic horticulturalist Shelley Fairhill to take on the challenge. Since losing his wife, Declan has adjusted to a life of self-imposed isolation—he wants Shelley to tackle the weeds, then leave.

But as Shelley gradually restores order and unexpected beauty to his garden, her caring nature also begins to thaw the ice encasing Declan’s heart. Can he let Shelley’s light in and finally let his second chance at love blossom?”

what I blog about…